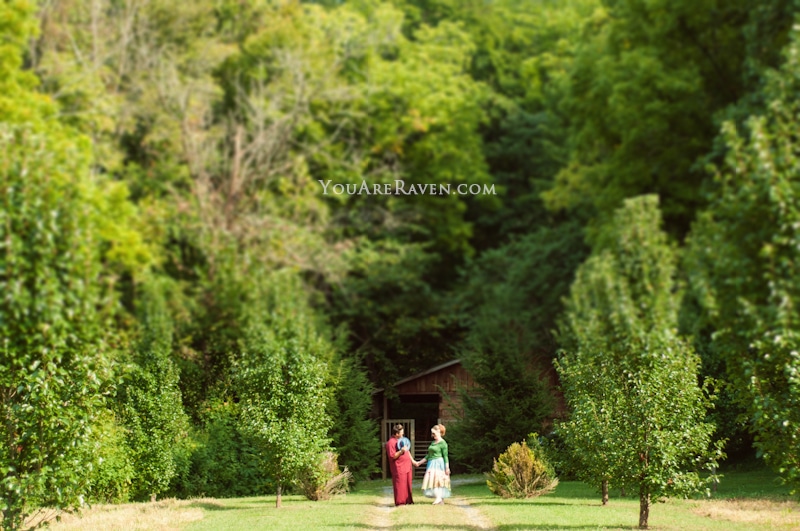 Kemberly & Gabriel’s wedding was my first elopement, and it was one of he best examples I’ve ever seen of doing your wedding your own way.  They got married in the mountains of Tennessee, right in between Gatlinburg & Pigeon Forge, in a little one bedroom cabin overlooking a stream.  They both have a flair for the rockabilly scene, evidenced in Gabe’s pompadour, Kemberly’s wedding outfit, and the decorations they brought from home {including shells and flamingos}.  Even their wedding day drink of choice was a classically American one: Jack & Coke.

It was such a neat experience, being the only people with this couple for their wedding day.  The officiant came for the quick ceremony, but was really only there for a few minutes.  Mostly, it was just the four of us.

I love the mountains, and this spot was just beautiful.  I don’t think their wedding could have been more perfect for them.  Every bit of the day reflected who they are as individuals and as a couple.  The bride went barefoot for the reception.  And they even changed into their “trailer trash” look to get in the water for pictures.  AWESOME.

Most of their day was homemade, too.  Kemberly made that pastel crinoline skirt you see, did her own hair and make-up, arranged all of the flowers.  And Gabe did his own hair, too.

And then they had one of the best First Looks I’ve ever seen.  I can’t get over the excitement in Gabe’s face, and the pride and love shining out of both of them.

Thank you so much, Kemberly & Gabe.  You guys ROCK.

A huge thank you to Christina from PhotoSaysHello for coming on this amazing trip with me and second shooting.